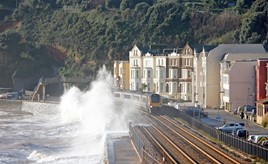 Government is working on bringing in extra rolling stock for the CrossCountry franchise, while an engineering solution is being investigated that could allow Voyagers to operate along the Devon Sea Wall.

In a Parliamentary debate on January 10, Labour MP Luke Pollard (Plymouth, Sutton and Devonport) highlighted that 30% of XC trains terminated at Exeter St Davids last November, because they could not pass Dawlish due to the weather.

He asked if High Speed Trains being sent off-lease by Great Western Railway could be used: “As well as placing orders for new rolling stock for the long term, will the Minister look at requiring CrossCountry to use the GWR HST trains that are currently being replaced with newer trains, to give CrossCountry extra, interim, Dawlish-proof capacity?”

Class 220/221 Voyagers are unable to operate west of Exeter during bad weather, as salt water has been known to affect the electrics fitted to the roof of the trains. This was discovered when they were first introduced in 2001.

Rail Minister Andrew Jones said Government was looking at all options for the XC franchise, including rolling stock. Jones said: “We will look at adding much needed capacity to the CrossCountry services as soon as trains become available.”

A Department for Transport spokesman told RAIL: “The CrossCountry franchise is currently due to end in October 2019, with a possible extension of up to 12 months. Details of the new contract are subject to upcoming discussions.”