Deltics up for sale 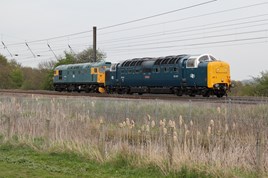 Martin Walker, the owner of D9016 Gordon Highlander and pioneer 55022 Royal Scots Grey, has decided to offer his locomotives and a large quantity of spare parts for sale.

Both locomotives are currently out of service, with D9016 stored at DCRail’s Washwood Heath base midway through an extensive bodywork overhaul. It had been planned for the locomotive to move to a heritage railway in the Midlands for completion of work, although whether this will now happen is unclear.

55022 is based at the North Yorkshire Moors Railway, currently disguised as long-scrapped 55018 Ballymoss. However, it has been out of service since suffering a crankshaft to phasing case quill shaft failure to its operational engine in July.

While the necessary engine repairs are not considered to be difficult, Walker explained that he had been awaiting the availability of a crane to allow the engine to be removed. The engine failure resulted in the cancellation of all its scheduled workings on the NYMR until it returns to operation.

Walker told RAIL: “I’ve had a great time with the locomotives, which has been both enjoyable and frustrating on occasions, but I think the time has come to let someone else take them on."