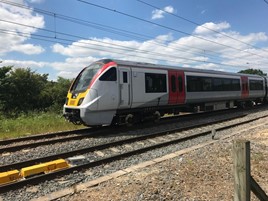 High-speed testing of Greater Anglia Class 720s is under way, although the operator has confirmed a further delay to the delivery of the Bombardier electric units.

Five-car 720501 is at Old Dalby’s Railway Innovation and Development Centre, where it has reached 110mph, although its maximum speed will only ever be 100mph.

In announcing the testing, GA said in a statement on July 5: “The first of the new Bombardier trains is expected to come into service at the end of this year, and all of them should be in service by the end of 2020.”
There are 89 five-car and 22 ten-car sets on order, but so far none has been delivered to Ilford for main line testing. The operator’s franchise agreement states they should be accepted between January 30 2019 and March 4 2020.

The trains will be used on all routes to Kings Lynn, Cambridge, Southend, Clacton, Harwich and Ipswich, as part of GA’s complete fleet replacement.