Deadline 2020: but still no decision on East Midlands HST fleet 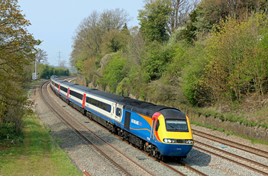 With just three months to go until the Persons of Reduced Mobility deadline of December 31 2019 comes into force, there is still no decision on the future of the East Midlands Railway High Speed Train fleet.

When Abellio won the East Midlands franchise in April, the Government suggested that ‘high-quality’ HSTs could be transferred from LNER, where they are due to be replaced by new Hitachi Azumas by the end of the year. While these LNER sets are not completely accessible, they do have passenger information screens (which the EMR sets do not).

An EMR spokesman told RAIL on September 9: “We have not agreed the HST situation. It’s out of our hands, sadly, and the deadline is fast approaching.”

A DfT spokesman told RAIL: “The new operator has, as part of its bid, included the use of Class 180s from the May 2020 timetable change. The base plan has a fully compliant fleet from December 2020."