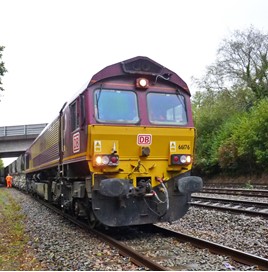 DBC runs two separate flows for the company, from Goonbarrow to Fowey and from Cornwall to Cliffe Vale in Stoke. Every week around 2,500 tonnes of clay is moved by rail, equivalent to 11,000 lorries per year being removed from Cornish roads.

Britain’s largest freight company is now also moving 50,000 tonnes of steel a week to docks in South Wales, with more than 30 trains a week serving Newport and Bridgeport Docks for Tata Steel.

"We’re by no means out of the woods yet, but we’re already seeing the green shoots of recovery," new DB Cargo UK CEO on business post-pandemic