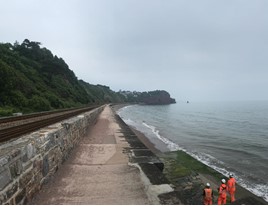 Detailed studies regarding the future of the Devon sea wall route between Dawlish and Teignmouth are nearing their conclusion.

The next stage of the project is the design of possible solutions, and community engagement will start in the autumn.

RAIL exclusively reported May that Network Rail (NR) was considering extending the wall and building shelters on parts of the route (RAIL 852).

Following storm damage in March, Secretary of State for Transport Chris Grayling said that ensuring the continued operation of the line was his “number one priority.”

Government has funded the studies, with three key areas being examined. These are between Parsons Tunnel and Teignmouth where there was a landslip in 2014, at Dawlish where the sea wall collapsed in February 2014 and the cliffs between Kennaway and Parsons Tunnels which are unstable according to NR. Once this is complete, NR will analyse results. Decisions will be formally submitted to the government following the community engagement events.

Rail minister Jo Johnson said: “It is vital we find a permanent solution to the problems at Dawlish because it is a crucial link for the people and the economy of the South West.”

Mike Gallop, Director of Route Asset Management for Network Rail said: “Some of the world’s best engineers are out on site as we gather as much information on the three key sites we have identified to help us start to work up possible solutions for us to present to the local community, local councils and government.”