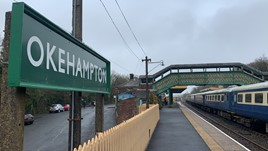 Daily passenger trains will return to Okehampton for the first time in nearly 50 years by the end of 2021.

Great Western Railway is to introduce a two-hourly service to Exeter Central later this year. Journey times are expected to be around 40 minutes, compared with the current 61-minute bus journey.

Previously, there had only been a summer Sunday service which last ran in September 2019 (last year’s operations were cancelled due to the pandemic). British Rail closed the route to daily passenger trains in 1972, although it remained open for freight.

Okehampton will also act as a railhead for residents of mid- and West Devon and North Cornwall. The line will be named the Dartmoor Line.

NR will start work immediately on preparing the 14-mile route from Coleford Junction (near Crediton) to Okehampton. This will include laying 11 miles of new track and replacing 24,000 concrete sleepers and 29,000 tonnes of ballast. Level crossings along the line require upgrading, while new GSM-R masts will be erected.

Funding for the reopening scheme is from the Government’s Restoring Your Railway initiative.
“The return of all-year services to the picturesque Dartmoor Line for the first time in half a century is a milestone moment in our efforts to restore our railways,” said Secretary of State for Transport Grant Shapps.