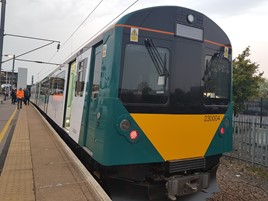 D-Trains entered passenger service on the national network on April 23, when 230004 worked the 0516 Bletchley-Bedford.

Operated by London Northwestern Railway and formed of Driving Motor Standard 300003 and DMS 300103, the two-car diesel unit is the first of three Class 230/0s to be used on the Marston Vale line.

They have been built by Vivarail at Long Marston, with LNW leasing them from the manufacturer. Their introduction will allow LNW to send three two-car Class 150/1s to Northern (150105/107/109).

The D-Train was rebuilt from ex-London Underground D-Stock vehicles 7100 and 7500. LNW said the other two trains (230003/005) will follow it into service during the spring.