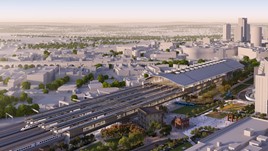 Curzon Street is the first HS2 station to obtain planning approval, with Birmingham County Council confirming permission to build the station on April 23.

Main construction on the seven-platform station is due to start in late 2022, with its opening in line with the delivery of Phase 1 (targeted to be 2029-33). The Invitation to Tender for the station’s construction will be launched in the summer. It will be served by nine trains per hour in each direction.

The existing Grade 1-listed Old Curzon Street building will be used to link to the new station’s eastern concourse at New Canal Street. Local heritage, including the Grade 2-listed Moor Street station and Woodman pub, has also been considered in the plans.

The Midland Metro will run alongside and underneath the new station, while there will be paths linking to local buses, rapid transport bus services and other rail services. There will be 550 cycle park spaces.

“Now that we’ve been given approval, we will continue to work with Birmingham City Council, Transport for the West Midlands, Midland Metro Alliance and Network Rail to make sure that the station is well-connected,” said HS2 Ltd’s Stations Director Matthew Botelle.