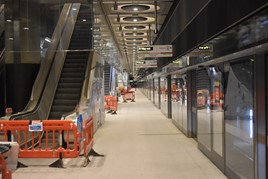 Trains from London Paddington Crossrail station to Shenfield will begin six months after trains start serving the low-level station from other destinations.

In a visit to Paddington, RAIL was told that the initial plan is for 12 trains per hour (tph) to serve the station, all running from Abbey Wood. That will rise to 24tph when the trains from Shenfield arrive there.

However, initially they will not run on to the Elizabeth Line’s western section, but instead will use the facility as a terminus. The two-platform station, which runs diagonally under the Network Rail station, will only become a ‘through station’ in Stage 5, which is expected to be a year after the planned six-month opening window for the cross-London scheme (October 2020-March 2021).