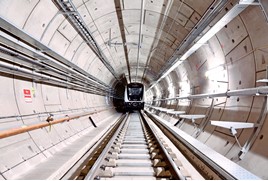 Crossrail says the central section remains on track to be delivered in a revised period between October 2020 and March 2021, after close-headway, multi-train testing started in June this year as part of its dynamic testing phase.

The update, released on August 19, is the first of a new series announced by its revamped leadership team in April, and forms part of measures to increase transparency in the final stage of the project.

The company says that testing and commissioning activity is taking place at all central section stations bar Bond Street, where fit-out and systems installation continues. Fit-out of the tunnels - another previous area of concern - is said to be almost complete, with handover of the completed shafts and portals due to take place “shortly”.

TfL Rail is already running 15 Class 345s on the eastern and western parts of the route, and Crossrail says the Bombardier trains are building reliability and achieving a “high standard” of performance. The first nine-car Class 345 trains are in service between Hayes & Harlington and Paddington.

Crossrail Chief Executive Mark Wild said work is progressing well, but acknowledged that there is still much to do before the central section is open.

“Crossrail is now in its critical and most challenging final phase, due to the significant integration and testing work that remains to be completed,” he said.

“We are fully focused on completing the Elizabeth Line and ensuring a safe and reliable passenger service as quickly as possible.”