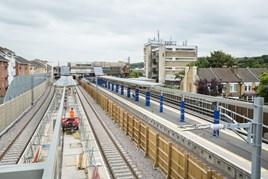 Network Rail and Crossrail have released images showing progress with construction of the new station at Abbey Wood as work enters its final stages.

The new station will be run by Transport for London and will open to passengers using existing Southeastern services later this year and will also serve the Elizabeth Line when it opens in December 2018.

Over the last four years, NR has been working in Abbey Wood to build the new station and upgrade the existing railway. NR has expanded the railway through Abbey Wood from two to four tracks, built two new platforms and installed overhead line equipment that will be used by Elizabeth Line trains.

The images of the new station, designed to resemble a manta ray from above, features a timber structure roof and a glass façade.  The timber roof has been built using 31 tonnes of steel beams, the four largest timber beams are 45 metres long and the roof is finished off with a zinc covering.