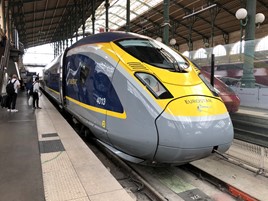 “Without additional funding from international government, there is a real risk to the survival of Eurostar,” the operator has warned.

A Eurostar spokesman told RAIL on January 18: “We have seen a 95% drop in passenger numbers since restrictions came into place last March, and with the latest measures from the end of December that is more like a 99% fall in traffic.

“That makes it clear how difficult the situation is for us and how unsustainable it would be to continue with that loss of revenue.”

The Eurostar warning followed a letter from business campaign group London First to the Government on January 15 asking it to help the cross-Channel operator, saying that failure to do so could damage the UK’s post-COVID recovery.

Almost 3,000 jobs either at Eurostar in the UK or in its supply chain could also be at risk should a solution not be found, it said.

In the letter on January 15 to Chancellor of the Exchequer Rishi Sunak and Secretary of State for Transport Grant Shapps, London First stated: “With international passenger numbers likely to remain low into the spring, our green gateway to Europe is in peril.

“If this viable business is allowed to fall between the cracks of support - neither an airline, nor a domestic railway - our recovery could be damaged. London and the UK would lose out both economically and reputationally.”

Pre-COVID, almost four in every five journeys between London and Paris/Brussels were made using Eurostar, and there were plans to expand the business via a merger with Thalys (RAIL 893).

However, in response to the decline in passenger numbers as a result of the pandemic, there is now only one train a day from London to Paris, Brussels and Amsterdam, while all other routes have been suspended.

Eurostar will not serve either of the UK international stations, at Stratford or Ashford.