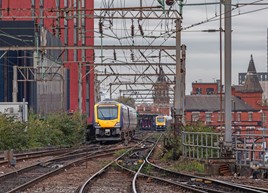 Northern’s underlying problems will remain regardless of whether it is Arriva or an Operator of Last Resort (OLR) running the franchise, Northern Managing Director David Brown told RAIL on October 28.

In an exclusive interview, he said: “Our 6,000-plus people will transfer to that business, but the underlying issues will remain - for example, the Castlefield Corridor, the infrastructure requirements, and the issue of capacity around Leeds and Neville Hill.”

Brown’s comments follow those of Secretary of State for Transport Grant Shapps at a Transport Select Committee hearing on October 16, when he raised the possibility of the franchise being nationalised (RAIL 890).

Regional stakeholders including Transport for the North (which co-manages both the Northern and TransPennine Express franchises) and local mayors have called for the introduction of an OLR.

“We need a new plan to underpin the timetable that has been committed to, working with Network Rail and the Department for Transport based on the recently released assumptions for infrastructure enhancements,” said Brown.

Among the schemes detailed in the DfT’s Rail Enhancements Pipeline released on October 16 are reopening Skipton-Colne, Leeds station capacity, Castlefield Corridor improvements, and Wigan-Bolton electrification (originally planned as part of NR’s North Western wires scheme). These are at the ‘initiate’ phase, waiting for permission to move to the development phase.

Schemes being designed include the Trans-Pennine Route Upgrade and the Hope Valley capacity upgrade.