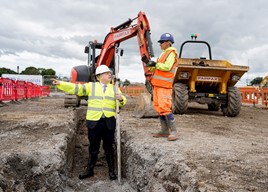 New Piccadilly Line Tube trains will be built at the £200 million development, as well as the possibility of new fleets for the Bakerloo, Central and Waterloo & City lines. Originally the four fleets were due to be part of one order, but that has now been split.

There is also the option to build main line suburban and inter-city trains at Goole.

Johnson said of the facility: “It’s going to be a European centre for excellence for rail technology right here in the East Riding of Yorkshire.”

The Rail Accelerator and Innovation Solutions hub for Enterprise (RaisE) has been officially opened in Goole.