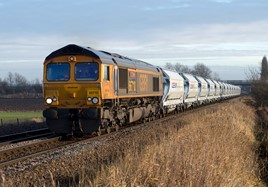 There has been an upturn in the amount of freight carried by rail, according to figures released by the Office of Rail and Road (ORR).

Construction and domestic intermodal both recorded record volumes of 1.13 billion and 1.72 billion net tonne kilometres respectively, during this period. ORR attributes the rise in construction to “increased demand for materials for housing repair and maintenance being moved by rail freight”, while the domestic intermodal increase “may be driven by growth in the retail sector increasing demand for goods moved by rail freight”.

Meanwhile, the once-dominant commodity of coal continues to decline, falling 13% in Q2 2017-18 compared with the corresponding three-month period in 2016-17, against a 23% rise in ‘other’, which includes biomass and mail. ORR says the decline “follows policy decisions to switch to more renewable fuel sources that have greatly reduced the use and transportation of coal over the last four years”.