Confirmed: Pacers will stay into 2020 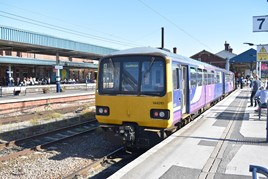 Pacers will stay with Northern into 2020, despite many years of promises that it would not happen.

The operator planned to withdraw all 102 of the diesel multiple units by the end of the year, following the introduction of DMUs and electric units built by CAF, as well as DMUs cascaded from elsewhere (RAIL 882). This intention was made clear when Arriva won the Northern franchise in 2016.

But senior sources have suggested that because the CAF trains are six months late, everything has “moved to the right”, meaning that the Class 14x fleet may have to stay in traffic beyond December 31.

A spokesman told RAIL: “We have put our new trains through an extensive testing programme, and the first nine new trains enter service on four routes.

“At the start of the year, we identified a small mechanical design issue that required a fix. We worked with CAF to find a solution, but this coupler problem had a regrettable and adverse impact on train delivery, testing and driver training.

“The introduction of the first new trains from July means we will retire the first Pacer train in August. We are working hard to remove the Pacers by the end of the year. Our top priority is to deliver a reliable train service for passengers, and we are therefore keeping our plans for the final date of Pacer operation under review as we bring the new trains into service.”

Speaking in Transport Questions in the House of Commons on July 18, Rail Minister Andrew Jones said: The fleet changeover has been delayed by a few weeks, but the majority of the fleet of old '142' Pacer class trains will be removed by the end of this year. A small number of the newer '144' class will be retained for a few weeks to maintain a smooth and reliable service.