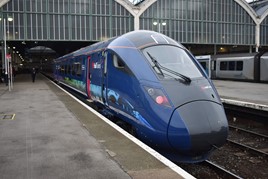 Government has no plans to suspend competition laws that would benefit open access operators on the railway, according to Baroness Vere.

In a House of Lords Written Question, Lord Berkeley had asked why the competition law had been temporarily suspended for Isle of Wight ferries, and if there were plans for other modes (including open access operators).

Hull Trains was first to suspend its operations following the COVID-19 outbreak, with Grand Central following a few days later (RAIL 902). GC subsequently delayed the introduction of its new London Euston-Blackpool North service (planned for this month) to next year.

Replying to Berkeley on May 5, Vere said: “Competition law has been temporarily suspended for Isle of Wight ferry services to allow the Isle’s lifeline operators to maintain a crucial lifeline between the island and the mainland.

“With the exception of the Solent Maritime Crossings, the Government has no current plans to grant further exclusion orders for transport providers during the COVID-19 outbreak."