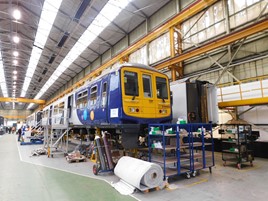 The Office of Rail and Road says concerns raised by the Competition Commission in 2009 about competition in the rolling stock market have not been alleviated.

It says the interaction between the franchising system and the leasing of rolling stock continues to determine much of the market, and that train operators’ choice is heavily influenced by the Department for Transport’s franchising policy and Invitation To Tender specifications.

This is the key finding of the regulator’s review into competition in the train leasing market, the final decision of which was published on April 28.

ORR also says that while its investigation into rolling stock leasing companies’ compliance with Transparency Orders has revealed no issues with compliance, new entrants who were previously unaware of the policy could be “caught out” by it if they engage in re-leasing activities.

A Transparency Order applies when a train leasing company makes an indicative offer of the level of rent for which it would be prepared, in principle, to lease existing rolling stock.

The Office of Rail and Road has authorised into service 36 three-car Class 730s on order for West Midlands Railway.