Coming soon to a station near you? 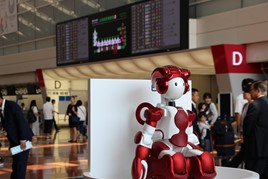 Robots could be guiding passengers around stations in the future, under plans revealed by Hitachi on October 15.

Using artificial intelligence, the robots would help passengers to find their trains and other amenities. This follows the Japanese company’s trial of smart sensor technology that could render ticket barriers obsolete.

“Britain’s railway stations could be revolutionised in the years to come, as we harness the latest breakthroughs in robotic and artificial intelligence technology,” said Hitachi Rail Sales Director Nick Hughes.

“Our concept of a smart station is already becoming a reality, with much of this technology already being trialled in Japan and Europe.”