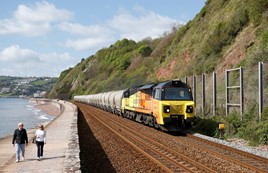 Colas Rail has called on Network Rail to provide more certainty on future rail freight paths, warning that investment in new services hangs in the balance unless paths can be safeguarded.

“If you’re making investments on the basis you’re going to get new traffic, you need to have some certainty about capacity on the network. And that’s one of the challenges we’re facing at the moment,” Gregory March, Performance and Policy Manager at Colas Rail UK, told RAIL at Multimodal 2018 in Birmingham in early May.

“Securing that capacity today for something you might want to run in the future is a challenge, as capacity is scarce.”

He added this challenge is being heightened by customers requiring certain services to arrive at certain locations at a predetermined time.

“Once upon a time there was a perception with rail freight that it didn’t matter what time the product got to the customer as long as it is got there - the time wasn’t critical,” he said.

“Increasingly there’s a norm that customers do want things at certain times - they want it to meet their markets and their customers. So naturally that means things like your schedules need to be looked at.”

March told RAIL that a push to transport more parcels by rail presents an exciting opportunity for the industry, but alluded to the need for future paths to be set in stone.

“One of the challenges of the market is when you speak to retailers such as Amazon they’re very keen, they’re very interested. But they want to see something today that exists as a service. That’s a challenging situation for us as it’s a big capital investment. That’s not to say we wouldn’t do it, but it’s a chicken and egg situation.”

March also welcomed the news that freight chiefs will be asked for their views during future passenger franchise consultations, stressing the importance of passenger operators taking on board the views of the freight industry.

“The key thing is that isn’t just a token gesture, and that they listen to what we say and we can work with them,” he explained.

“If you think about it, freight operating companies aren’t franchises. They’re not businesses that only exist for five to ten years and then someone else takes over. When we make an investment in assets they’re not bought with a view to using them for a few years then moving on.

“Our business is a long-term one. That’s why it is essential passenger operators do engage, as most of the franchises are relatively short in the grand scheme of things. There’s a real risk that if you prioritise that over the freight business, then you’ll discourage investment in assets which are important for the rail freight market.”