Coal traffic declines - but underlying trend is up 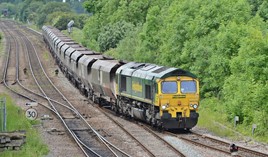 The continued decline in coal traffic led to a 3% drop in the volume of freight carried on Britain’s railways between July and September 2019 (Q2, 2019-20), compared with the corresponding three-month period in 2018-19.

However, other traffic is increasing, according to figures published by the Office of Rail and Road on December 17.

But construction (up 4%) and domestic intermodal (up 2%) increased to their highest levels since 1998-99 and now account for 70% of rail freight moved.