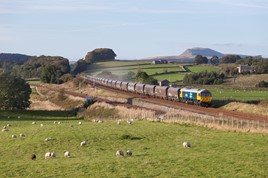 A 5% rise in construction traffic in the first quarter of 2019-20 helped to offset the continued decline in the amount of coal carried on Britain’s railways.

Coal volumes dropped by 19% compared with the corresponding quarter in 2018-19, to 1.9 million tonnes - the lowest figure on record, according to the latest statistics published by the Office of Rail and Road (ORR).

The data, released on September 26, showed a 1% year-on-year decline in tonne-kilometres carried on Britain’s railways, with coal traffic falling by 53% to 0.12 billion net tonne kilometres (ntkm).

Construction traffic increased to 1.21 billion, with rises in domestic intermodal, international and other traffic also helping to counter the decline in coal traffic, although metals fell by 7% to 0.36bn ntkm, and oil and petroleum by 3% to 0.25bn ntkm.

The volume of freight lifted fell by 3% year on year to 18.5 million tonnes.