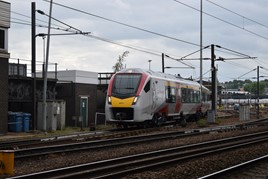 GA Managing Director Jamie Burles explained that subject to final certification and approvals, the plan is for ten sets to be in traffic by the end of the year, which would enable the Class 90s and Mk 3s to be withdrawn.

He added that should that not be possible, then GA would seek a derogation to operate the non-compliant stock for a short period next year. They are missing Passenger Information Systems.

GA Joint Project Manager Steve Mitchell told RAIL that it would be possible for the Class 745/1s that are destined for Stansted Express to be used on the Great Eastern expresses initially, running alongside Class 745/0s. This is because the ‘379s’ currently used on the Stansted route already meet disability requirements.