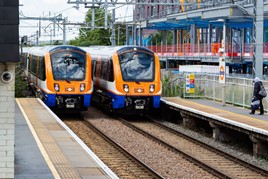 The trains should have entered traffic in March 2018, but software problems delayed their introduction until May 2019. Because the diesel trains they were replacing had in the meantime been moved to West Midlands Trains, LO was forced to use buses in place of trains.

The four-car ‘710s’ are now operating a 15-minute frequency. Free travel on the line will be available to passengers affected by the delays on the route, as promised by Transport for London earlier this year.

The bill is being picked up by Bombardier, and the concession runs from August 31-October 1 inclusive. Heidi Alexander, London’s Deputy Mayor for Transport, called the month’s free travel “a well-deserved thank you to passengers for their patience”.