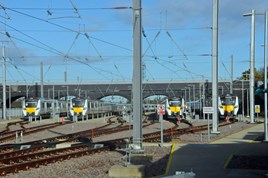 Twelve-car 700125 and 700128 were the first to be used on GTR’s Great Northern trains. The electric multiple units are being introduced gradually, and will start using the Canal Tunnel to link with the Thameslink network and Gatwick Airport from May.

GTR Engineering Director Gerry McFadden said: “These first new Thameslink trains on the Great Northern route are a shape of things to come and feature the latest in technology. Their introduction is part of a broader fleet modernisation programme that has seen most of our older trains withdrawn and new trains introduced to Cambridge, Peterborough and King’s Lynn. This will continue into next year with new trains on the Moorgate line.

“At GTR we’re modernising the railway, and starting in May we’ll be giving passengers longer trains and more services to provide vital added seats on a route that has had a 70% increase in passenger numbers in just 14 years.”