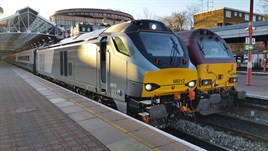 A Class 68 was used by Chiltern Railways on a passenger train for the first time today (December 15).

The locomotive, 68012, propelled the 0744 Banbury-London Marylebone. It is the first of six Class 68s that will be hired from DRS to CR. They will be used, initially, to replace the existing Class 67s hired from DB Schenker. The passenger operator says that using Class 68s will enable the company to run longer trains eventually.