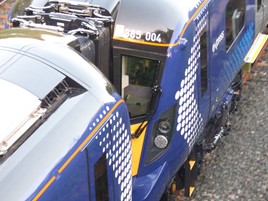 This means that subject to formal approval, which sources suggest will take a few weeks, work can begin on modifying trains at Springburn Works.

Three-car 385004 has been fitted with two designs and completed a series of tests between Glasgow Central and Paisley Gilmour Street.

It is unknown when the '385s' will enter traffic with ScotRail. The ten in Scotland for testing will all visit Springburn, where the new screens will be fitted. Class 385s already completed at Newton Aycliffe are also likely to be modified in Scotland.

This development follows comments made during a Rural Economy and Connectivity Committee meeting on May 16 by Scottish Transport Minister Humza Yousaf, who said: “I do not find it acceptable that a company with a global footprint the size of Hitachi’s has had some of the most basic problems.”

Yousaf added that First Minister Nicola Sturgeon has also intervened in the situation, saying she had become involved “to get the message across that we expect it to deliver on its promises”.

The Class 385s were due into traffic from December last year, but have yet to carry passengers owing to faults first with software, and then with the windscreens.

Regarding the new electric multiple units entering passenger traffic, Yousaf said: “It is still anticipated that they will be introduced later in the summer. I say ‘anticipated’ because it depends on the windscreen issue being resolved.”

He said that the two designs fitted to the electric multiple unit were a variation of the curved windscreen. The other is a flatter windscreen, installed in a flat aperture.