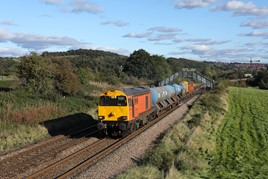 Class 20s owned by Harry Needle Railroad Company have been resurrected for hire duties after a long-term deal with GB Railfreight came to an end in the summer.

Eight Type 1s had been hired by GBRf to haul London Underground S-Stock between Neasden, Derby Litchurch Lane and Old Dalby. Initially this was for new deliveries, but then for S-Stock being returned to Bombardier for modifications.

That deal ended in July, with the ‘20s’ placed into warm store pending developments.

Now HNRC has found use for most of the locomotives. One pair (20311/314) has been hired to Direct Rail Services for railhead treatment train duties, while another (20118 Saltburn-by-the-Sea and 20132 Barrow Hill TMD) has been hired to DCRail for freight duties.