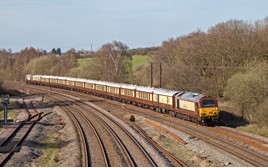 Charter train stakeholders have welcomed Network Rail’s plans to build up a database of regular, gauge-cleared and “operationally robust” paths for special trains as part of its Control Period 6 (CP6, 2019-24) commitments.

With the national network becoming more and more crowded, and with newer and faster trains either imminent or already on the rails, slotting the 1,000 yearly charter services (500 of which are steam-hauled) in and around regular services is increasingly becoming a challenge for the small team of planners.

According to NR’s CP6 document, these strategic paths will be trialled in the December 2018 timetable, with the intention to have a full catalogue saved in the Working Timetable by December 2020.

As part of the plans, these paths would be gauge-cleared for specific locomotives, with the aim of awarding certificates to locomotives on an annual basis specifying the routes they can work.

At present, the majority of tours have to be planned, gauged and pathed on a one-off basis. NR claims this new approach would avoid the need to make bespoke plans, offering greater certainty for tour promoters and passengers.

“This gives a structure which helps us and provides a certainty to our customers,” UK Railtours’ John Farrow told RAIL.

“The timings should be within ten to 15 minutes of those advertised. It’s a positive move - Network Rail is making a genuine effort as Sir Peter Hendy (NR Chairman] wants to promote charters more.”

Farrow claimed a path will exist from London to Crewe, while another from the capital will go to “at least” Par. Trains will then be able to continue beyond the end of the ‘strategic paths’ by adding a short-term path into the system if there is room on the network.

“We are 100% supportive of having working timetable paths out of London,” Steam Dreams Chairman Marcus Robertson told RAIL.

A Network Rail spokesman told RAIL: "the creation of charter paths from London stations is based on existing capacity of the network and customer requirements. It is worth mentioning that many charters already use Platform 2 at Victoria because it has undergone works to make it suitable for steam locomotive operation. From North London termini we are looking at paths for electric hauled charters as this fits into the timetable better than a charter requiring steam/diesel haulage (but with a view to switching to steam haulage at Crewe/Carnforth/Peterborough)."