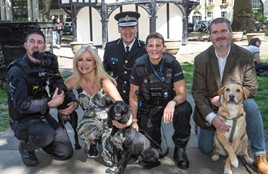 A charity launched at Rail Live for a retired canine crime-fighter raised £1,700 across the two days.

Using as its figurehead retired Explosive Detection Police Dog Mojo, who was first on the scene at the Manchester Arena bombing on May 23 2017, the cause highlighted how years of chasing criminals and searching for terrorism devices can lead to police dogs needing expensive medical bills in their later years.

The Railway Dogs Benevolent Fund will pay for ongoing medical care for the dogs, whose bills become the responsibility of the owner (usually the handler). It’s also often difficult to obtain adequate pet insurance cover because of pre-existing ailments, injuries sustained at work, and conditions related to the dangerous nature of policing.

BTP officer PC Paul Wood lost his police dog German Shepherd Luka due to a serious illness last year. Luka developed a severe bacterial infection in his nose which began attacking his immune system. Several courses of medication didn’t improve Luka’s health and he was referred for a scan. A week later his condition deteriorated suddenly.

The Fund is run by a team of volunteers including two PD handlers. There are currently 22 retired BTP dogs living with their former handlers or adopted families.

To find out more about the Railway Dogs Benevolent Fund and donate to support its work, visit www.raildogs.fund.