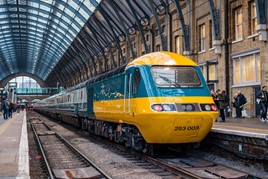 The High Speed Train repainted for the LNER farewell tour on December 18-21 will not join other sets in being leased to East Midlands Railway.

A source confirmed that once the set had been used for its final services, it would instead be sent to Potters Group, Ely, for warm storage pending a decision on its future.

Nine sets are due to move from LNER to EMR, to replace the latter’s own HST fleet. Six of the sets transferring belong to Angel Trains, while the other three moving are Porterbrook HSTs.