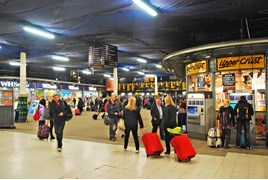 Progress on implementing the Fares and Ticketing Review published by former Secretary of State for Transport Patrick McLoughlin in 2015 is “highly uneven with very limited progress” in some areas, claims Campaign for Better Transport.

CBT published its findings in October, and says some key promises “have been ignored and seemingly forgotten”, although it also praises the Government for fixing regulated fares rises at the retail price index level of inflation for the duration of the Parliament. On the key policy areas, it rated them from 0 (no visible signs of progress) to 3 (commitment exceeded).

On single-leg ticketing, the Government promised to trial a scheme to regulate longer off-peak tickets on a single-leg basis, to remove a “confusing scenario” where some cost almost as much as return tickets. The CBT says the Government has failed to hold the trial, and points out that there is no timetable or indication when this will take place. It scored this commitment zero.

On part-time tickets for commuters travelling for fewer than five days per week or outside peak hours, the Government again promised to hold a trial. However, other than a small sample of 65 people on Southern, there has been no progress. This area also scored zero.

The South Eastern Flexible Ticketing Programme has been “beset with problems and delays”, according to CBT, with “no clear timetable of completion”. This category also recorded the lowest possible rating.

A code of practice on ticketing information has been introduced, but the CBT criticises this as being “written by the rail industry for the rail industry and does not nearly go far enough to address the problems of fares and ticketing complexity”. It gave this commitment a ‘pass’ category and a score of 1.

The final commitment the Government made was to reduce the ability of train operators to increase fares on some routes by an extra 5%, on top of increases set by Government to a maximum of 2%. The CBT says the Government has “passed with flying colours” by abolishing the flex rule entirely. This category achieved the maximum score of 3.

With the rail industry scoring a total of 4 from a maximum of 15 points, the CBT concludes: “Two years on, there is still a huge amount of work to do to meet these promises and give passengers what they want - cheaper, fairer and simpler rail fares for everyone.”