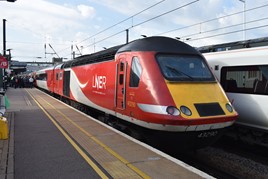 The three-year saga over how to replace non-compliant High Speed Trains on East Midlands Railway has been resolved… by using cascaded HSTs.

When then-Secretary of State for Transport Chris Grayling cancelled the Midland Main Line electrification north of Wellingborough in July 2017, he said that new bi-mode trains would be delivered from 2022.

However, because the MML’s existing HST fleet will not meet accessibility regulations that come into force from January 1 2020, they will have to be withdrawn by the end of this year - leaving a major shortfall in the inter-city fleet.

When Abellio won the East Midlands franchise in April, the Department for Transport said that cascaded HSTs from LNER would be an option.

This has now been confirmed, with six nine-coach HSTs from Angel Trains and three eight-coach sets from Porterbrook set to temporarily join the EMR fleet.

EMR Fleet Director Chris Wright said: “By December 2022, we will have replaced our entire train fleet to provide modern and accessible trains better suited to the routes they operate. That work is already well under way, but it does not happen overnight."