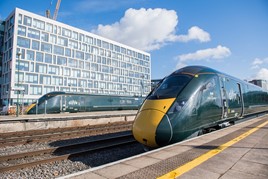 Electrifying the railway between Cardiff and Swansea was not a sensible thing to do, according to Secretary of State for Transport Chris Grayling.

In a House of Commons debate on Great Western electrification on April 19, Grayling said: “Spending hundreds of millions of pounds of taxpayers’ money and causing massive disruption to passengers to enable the same ​trains to travel on the same route at the same speed to the same timetable as they do today was not actually a sensible thing to do.”

He said the decision was made with Prime Minister Theresa May.

Grayling responded: “We made the decisions about electrification on the Midland Main Line and the line between Cardiff and Swansea on the simple basis that spending hundreds of millions or billions of pounds to achieve the same journey times in the same trains was not sensible.”
On bi-mode trains, he said: “The trains on the Great Western route are already in operation, delivering services to people in Swansea, for whom it is a great and important investment.”