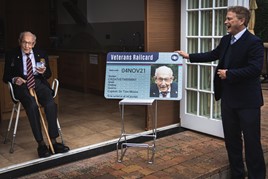 Captain Sir Tom Moore was the recipient of the first Veterans’ Railcard, following the launch of its new design.

Former servicemen and women will receive up to a third off fares from November 5. The railcard is aimed at supporting veterans post-service - it will also offer 60% off fares for the holder and their companion, and 60% off for up to four children.

It’s estimated some 830,000 veterans will be able to use the card, having previously not been eligible for other railcards. It will be available for an introductory £21 until March 31, or £61 for a three-year card.

Moore, who served in the Second World War, raised £30 million for the NHS earlier this year during lockdown. He was presented with the very first card at his Bedfordshire home by Secretary of State for Transport Grant Shapps (pictured).

“We have an eternal debt of honour to those who have served our country, and this railcard is part of marking our gratitude,” said Shapps.

Robert Nisbet, Rail Delivery Group Director Nations and Regions said: “Britain’s train companies are proud to support those that have served in the UK Armed forces and their families by offering a third off rail fares with the new Veterans' Railcard which is now on sale. We’re delighted to have worked with the DfT, on behalf of the rail industry, to help make rail travel even cheaper for veterans and in doing so, connect them to job opportunities and training, as well as to their family and friends”.