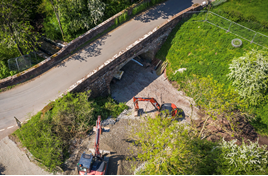 Highways England has come under fresh fire for infilling an ‘unsafe’ Cumbrian bridge that is key to two heritage line projects, after a previously unpublished report has revealed that the structure is perfectly sound.

The Historical Railways Estate Group (HRE) has unearthed an engineering assessment made by the now-defunct British Railways Board in 1998, which declares that the structure at Great Musgrave is fit to carry vehicles weighing up to 17 tonnes, and with only minor work could be upgraded to 40 tonnes.

HRE has called for infilling work around the 1862 structure to be halted, because it jeopardises the future connection between the Eden Valley and Stainmore railways.

Calling on Eden District Council to stop the work, HRE Group’s Graeme Bickerdike said: “What’s emerging here is clear evidence that the bridge is being infilled for policy reasons, not because of any engineering or public safety issues.

“Despite this, Highways England has now told Eden District Council that it is acting ‘to prevent an emergency arising’. This represents a disreputable abuse of rights where immediate action is needed to prevent death or injury.”

FROM THE FILES: End of an era for East Anglian semaphores

As signalling in East Anglia undergoes radical modernisation, DAVID ALLEN outlines what the changes will bring and gives a salute to the old system