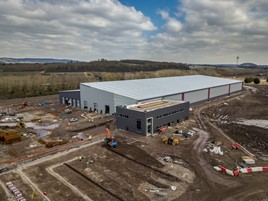 The structure of the new CAF factory at the Celtic Business Park near Newport has been completed, ahead of its planned opening later this year.

Work has turned to fitting out the factory, ready for production to begin this autumn. No deals have been confirmed for the site, but West Midlands Trains has hinted that its order with the Spanish company will be built there.

The factory will be capable of building suburban, metro and high-speed trains, as well as trams. CAF says 300 jobs will be created, for which recruitment has begun.

“The project is running like clockwork - on budget and on time. The new manufacturing facility will be key to CAF’s growing business operations within the UK and delivering manufacturing contracts the company has already secured,” said CAF’s UK Director Richard Garner.

Funding has been supplied by CAF and via grant support from the Welsh Government’s Inward Investment Programme.

A recruitment day held at the site by CAF on March 19 was attended by more than 700 jobseekers. It was hosted by Coleg Gwent’s City of Newport Campus and was the first open event for potential staff. Of those that attended, 631 filled out expressions of interest forms.

Graham Taylor, Chief Operating Officer CAF Rolling Stock UK, said: “I tried not to have a preconceived idea of how many people might turn up, but it went well beyond any expectations.”