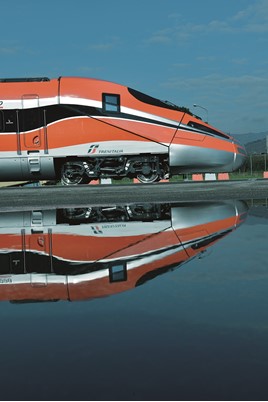 Bombardier and Hitachi have joined forces in a joint venture with the aim of building trains for High Speed 2 (HS2) – and in a related move, Spanish trainbuilder CAF has been invited to tender in a bid to “ensure a robust competition.”

An HS2 Ltd spokesman said: “In light of the recent decision by Bombardier and Hitachi to form a joint venture, we have now invited CAF to tender for our rolling stock procurement to ensure a robust competition. All the bidders have been notified of the change to the shortlist and delivery timetables for the new trains have not changed.”

In a statement, Bombardier and Hitachi said the joint HS2 project would “provide a launch pad for new investment in education and learning, adding to their existing partnerships with local schools and the 200 apprentices and graduates who are already employed.”

It follows a similar partnership in Italy where the companies joined forces and built the ETR1000 for Trenitalia. Known as the ‘Red Arrow’, the train has a top speed of 398km/h.

The HS2 trains deal is worth £2.75 billion for a minimum of 54 trains that will run on Phase 1 of HS2 between London and the West Midlands. The fleet will be ‘classic compatible’ and will operate on the current network too, serving destinations including York, Newcastle, Liverpool, Glasgow and Edinburgh.

The formal tendering process is due to start later this year, with contract awards due in late-2019.

Karen Boswell, managing director at Hitachi Rail, said: “By joining together in partnership with Bombardier, we will draw on a huge wealth of UK experience and the best in modern technology – including our pioneering ‘bullet train’ experience. Our aim is to deliver a new British icon that will be recognised around the world – a Spitfire for the British railway.”

Bombardier Transportation Managing Director UK Richard Hunter added: “By joining together in partnership with Hitachi we will combine both company’s global high speed expertise with unrivalled British experience, and help generate skills and prosperity across a number of UK regions.”

The companies will share HS2 bidding information but will remain competitors in other markets. Alstom, Siemens and Talgo are also shortlisted for the deal.