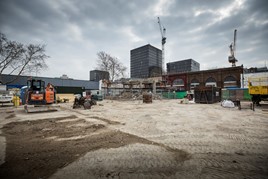 Two major demolition projects at London Euston have revealed the extent of the new HS2 platforms and concourse to be built at the terminus.

The six-month demolition of the former Ibis Hotel on Cardington Street was completed in the first two weeks of April, while the second half of the disused National Temperance Hospital was also completed in that timeframe.

Two time capsules were discovered during the work, and will be conserved for future study and display in the community.

The demolitions were carried out by enabling works contractor Costain Skanska Joint Venture, with sub-contractor Keltbray.