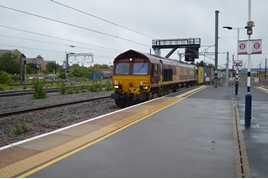 Speaking on the day the company signed an agreement with Maritime Transport Ltd to operate trains from Felixstowe and Southampton, Werner said he did not know how the UK’s decision to leave the European Union on March 29 would affect rail freight.

“This country needs products. All paper is imported, for example. Will it stop? No, maybe it will get more expensive,” he said.
He added that the company was in discussions to run extra freight trains on HS1, having told RAIL in an exclusive interview last September that the company saw the route from the Channel Tunnel to Barking as an alternative to the road system, post-Brexit.

Werner told RAIL that discussions were ongoing with the Department for Transport and HS1 Ltd to use the route, but could not offer more details.