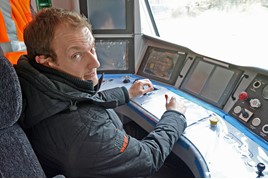 Head of News (Print and Digital) Richard Clinnick leaves RAIL for pastures new on May 19, after 15 years working on the magazine.

Richard joined RAIL as News and Features Writer back in September 2005, leaving the world of local newspapers for a career in railway magazine journalism.

Over the years, he has held a number of roles on the magazine, rising to the role of Features and Fleet Editor in 2008, before becoming Assistant Editor in 2013 and finally to his current role in 2019.

During his time on the magazine, Richard has represented the brand in numerous television and radio interviews, travelled as far as California and Africa for press events, and was asked to give insight to a Transport Select Committee hearing.

“RAIL has given me the chance to see things and enjoy experiences I never thought possible for a lad living in Norfolk in the early/mid-1990s,” said Richard.

“I cannot thank RAIL enough for rescuing me from local newspapers and enabling me to do what I’ve done for the past 15½ years.

“ I really hope RAIL continues to grow from strength to strength and I will continue reading the magazine, of course!”

“He has a work ethic which is second to none and his detailed knowledge of the UK train fleet and its history is unparalleled.

“Ask him for the make-up of a given Class in terms of power, configuration, number of vehicles (both per set and in total!) and he’ll instantly rattle it all off. I shall miss having this walking ‘encyclopaedia’ at the end of a text or phone call!

“Richard did a great job in building a superb network of official and informal contacts which enabled him to keep his finger on the pulse for the 15½ years he’s worked alongside me, since I rescued him (in his words)  from a Yarmouth freesheet.

“It really wont be the same without him and we will all notice the difference. Cheers Richard - and good luck!”