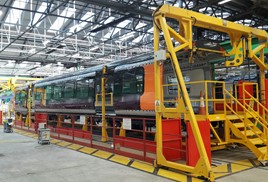 Bombardier Class 730 Aventras being built for West Midlands Railway were unveiled at the manufacturer’s Derby Litchurch Lane facility this week.

Thirty-six three-car Class 730/0 EMUs are being built for WMR, while 45 five-car Class 730s (designated Class 730/1 and ‘730/2’) are on order for London North Western Railway (part of the overall West Midlands Train operation).

The three-car trains will be used on the cross-city routes in Birmingham. They will feature air-conditioning, free WiFi, at-seat power and USB sockets, as well as dedicated wheelchair spaces and bicycle storage.
Already the first EMU (730001) is undergoing testing at the Velim facility in the Czech Republic, with the first trains expected into traffic next year. The WMR fleet will replace Class 323s that will cascade to Northern.

“I am delighted to see for myself that progress has been continuing apace, despite the challenge of Coronavirus. This is one of two new fleets we are introducing as we increase our capacity by 25%, as we continue to welcome passengers back to the railway,” said Edwards.