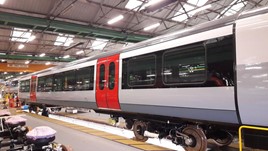 Construction of the first Class 720 Aventra vehicles for Greater Anglia is well under way, with bogies fitted to the first bodyshell and underframe.

The first of the electric multiple units are due to enter traffic next March, running initially on the Great Eastern Main Line.

They are being built by Bombardier at Derby Litchurch Lane. Financed by Angel Trains, there is a deal for 89 five-car and 22 ten-car sets for GA. These will replace all the existing EMUs in traffic with GA apart from the Class 379s, which will be replaced by ten 12-car EMUs built by Stadler.

Two production lines are being set up, with the first ‘720’ in various stages of construction. The aluminium pre-glazed bodysides, roofs, floor and cabs are manufactured, wired, fitted out and painted before being bolted together on the line.