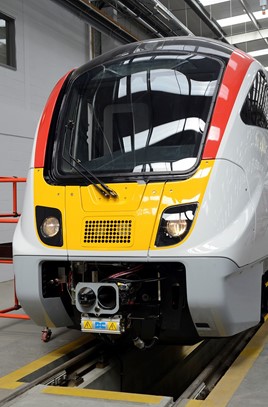 Class 720 electric multiple units will not enter traffic with Greater Anglia this year as planned.

They will become the third Bombardier Aventra fleet to be significantly delayed, following the Crossrail Class 345s and London Overground ‘710s’ with GA forced to apply for derogations to enable non-compliant EMUs to remain in traffic until their replacements are ready.

GA Managing Director Jamie Burles told RAIL on September 4 that the Canadian firm was due to carry out its latest software drop onto 720501 in mid-September (as this issue of RAIL went to press), and that should that be successful, then the five-car EMU could move to Ilford for testing at the end of this year, or very early next year.

There are 89 five-car and 22 ten-car Class 720s on order from Bombardier. These are following the London Overground Class 710 fleet, which entered traffic some 14 months late, and which has still not fully entered traffic. Burles explained that the issue with the ‘720s’ relates to the Train Control Management System (TCMS), which is similar to the ‘710s’ but not identical.

He told RAIL: “Has Bombardier made progress? Yes. They are drafting staff in from the aerospace division to get this process sorted, and we are supporting them as best we can.”