Bombardier Class 710/2s authorised, but wait goes on for entry into traffic 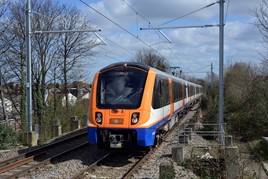 Bombardier Class 710/2s have received conditional approval from the Office of Rail and Road (ORR), but Transport for London is still unable to confirm when they will enter passenger service. The trains are some 13 months late.

Authority was granted on April 11, albeit with 13 restrictions. This means the trains can now be used to train London Overground drivers, ahead of the introduction of the dual-voltage electric multiple units on the Gospel Oak-Barking route.

However, a hazard management plan must be agreed with London Overground before passenger services start, while Arriva Rail Limited (which operates LO) must ensure that logging into the non-active cab during passenger use is inhibited before the trains enter passenger traffic.

Also, within a year of the authorisation, Bombardier must make modifications (either in isolation or combination to the LO fleet) to reduce the risk of climbing and surfing on inter-car connectors. This covers both in-service and stabled trains.

The manufacturer must supply ORR with a written commitment in the form of a time-bound plan that must be accepted by the regulator. The operator must also provide details to ORR regarding mitigating the risks of the inter-car connectors, before putting the trains into traffic.

The trains had been delayed owing to issues with the Traffic Management System fitted to the Aventras. So far, eight of the 55 trains have been delivered to London (710261-267/269), with fault-free running having been undertaken over the past few months.