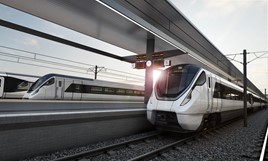 Bombardier has confirmed development of a 125mph bi-mode Aventra that could also include battery technology.

The Derby-based manufacturer plans to offer it to three upcoming franchise competitions, while also confirming it sees potential to export the trains.

Spokesman Will Tanner told RAIL that Bombardier plans to offer it for the East Midlands, West Coast Partnership and CrossCountry franchises, and confirmed that should any deals for the trains be won, they would be built at Derby Litchurch Lane where development work has already taken place.

Tanner explained that the company believes there remains a strong demand for bi-mode trains. The Aventra bi-mode would offer a maximum 125mph speed in both diesel and electric, and Bombardier claimed the ambience would be far better than other bi-mode units on the market. An option for ‘last-mile’ battery power is also being considered.

He said the company agreed with Rail Minister Jo Johnson’s comments that bi-mode trains provide a very useful “bridging technology to other lower-emission futures for rail”.

Initiative to give visitors a Taste for Travel