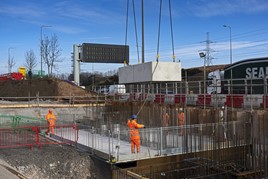 Preparatory work is almost complete on the site of HS2’s new Interchange station that will serve Birmingham Airport, the NEC and Birmingham International. Major structures have started to arrive ahead of construction.

The 150-hectare site is within a triangle of land formed of the M42, A45 and A452. Modular bridges are currently being constructed over the M42 and A446, while remodelling of the road network is needed to create access to the new station.

Led by Urban Growth Company, there are major regeneration plans around the site to support 70,000 new and existing jobs, 5,000 new homes and 650,000m2 of commercial space that will generate an estimated additional £6.2 billion Gross Value Added (GVA) per year.

“As a transformational project, HS2 will play a pivotal role in creating regeneration opportunities around the station, with plans for new jobs, homes and commercial space resulting in a huge boost to the regional economy,” said Matthew Botelle, HS2 Ltd Stations Director.