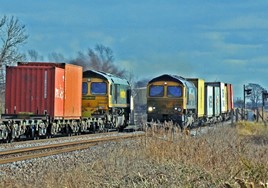 Speaking to delegates at The future of rail infrastructure in the UK - CP6, the Integrated Rail Plan, and Delivering Modernisation virtual conference on February 4, Simpson explained that rail freight must begin its work to meet government decarbonisation deadlines of 2050 now, rather than wait until 2049.

While making the case for electrification, she said that the long-term future is electric, bi-mode or tri-mode traction, and that the sector could also start decarbonising now by running longer trains.

Alternative power could be an option for yards and terminals, she said. And while she acknowledged that not all routes could be electrified, she told delegates she had not read anything yet to suggest that hydrogen could help the rail sector.

Speaking to RAIL on February 2, Simpson said it was a commercial market. Therefore, even though it was government that set the net zero 2050 deadline, “the decisions on investment rest with the freight operating companies”.

In a strategy document written at the end of 2020, Freightliner highlighted the age of the Class 59s, ‘60s’ and ‘66s’ used by the freight sector. It said that as planning for their replacement begins, there is an opportunity to rapidly increase the percentage of electrically hauled freight trains.

Already GB Railfreight is looking at the market for such locomotives, although it expects to continue using ‘66s’ for many decades to come, with some of its fleet little more than five years old.

GBRf Managing Director John Smith told RAIL on February 1: “The ‘66s’ will be around for 30 to 40 years yet - we have some of the youngest ones built.”

He called them “a real workhorse”, adding that their introduction had been the biggest traction change since diesel power replaced steam.