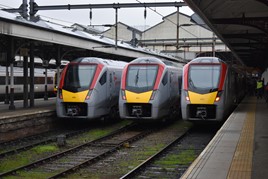 Privatisation has made Britain a better country, according to former Secretary of State for Transport Patrick McLoughlin.

In his George Bradshaw address on February 25, he said: “In 2013, as Transport Secretary at the 20th anniversary of the Railway Act, I said ‘rail privatisation has made Britain a better country’. It has certainly delivered a better railways system. Seven years on - I stand by that.”

McLoughlin looked back to the days of British Rail, telling guests: “I sometimes compare my time in the Department for Transport in the late 1980s to my time there in the 2010s. In the 1980s I saw a railway in the doldrums, run by bureaucrats not entrepreneurs, dirty and unsafe, and declining in the nation’s esteem.”

In comparison, he claimed now that the railway has been transformed into “a growing, thriving modern railway with more than double the number of passengers.”